I have often been curious why the donkey and elephant are the symbols of the two major American political parties.  The animal symbols of the Democratic and Republican parties were initiated in the 19th century: the donkey during the presidential campaign of Andrew Jackson in the 1820s and the elephant during the presidency of Abraham Lincoln in the 1860s.  Both animal symbols were popularized by the political cartoonist, Thomas Nash, in the 1880s.

Many of the elephant and donkey (also known as an ass) patterns are found on children's items.  Here are a few of my favorites.

I realize I didn't tell you much about the origin of the symbols, so if you want to learn more about the United States Republican and Democratic animal symbols, follow this link.

I can't wait for this election to be over! 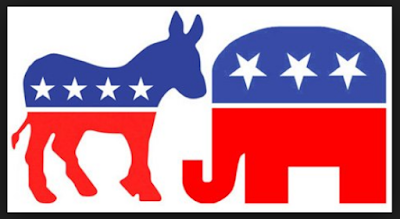