One of my readers was hoping to see some transferware March patterns.  Here are a few, starting with a Wedgwood plate.  You probably know that Wedgwood made a series of month tiles.  They were so popular that Wedgwood incorporated the designs onto plates surrounded by one of several Wedgwood border.  Below are some tiles from the Wedgwood Museum in England.  You can see March on the planter, as well as on the center left in the group of tiles. 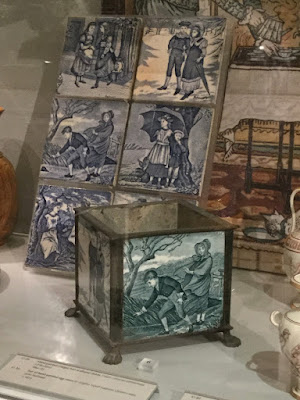 The month of March is also found on children's plates.  They make excellent birthday presents.

Below is a plate from Adams "Seasons" series that shows a man pruning a tree.  A banner to the right of his spade says the word "March."

March is often illustrated with a windy scene.  Below is a "March" tile with a woman and child holding their hats.  Notice the ram under the word "Aries" in the the circle near the top left.  Aries is one of the astrological symbols of March.


One more pattern.  Here is a March child's mug.  I find the text a bit confusing.  Wouldn't the days of feasting and gluttony be over by January?   However, 19th century children's china was often intended to instruct, so here is a poem about gluttony.


Remember that all of the patterns that illustrate a month were part of a series.  It would be fun to collect them all!