Lots of common children's games appear on transferware plates and mugs: for example, blind man's buff (or bluff) and marbles.


These games were still common when I was a child in the 1950s, but I wondered if the games are still played today.  I showed my seven year old granddaughter some of the patterns.  She knew about blind man's buff, marbles, charades, leap frog, rope jumping, and kite flying.


She also knew some top games, although not Whip-Top.

She and I were totally puzzled by Puss in the Corner, so I thought we'd do a bit of research.

Wikipedia is my go-to encyclopedia, although I still have my late 1970s set of World Books.  Here's a link to Puss in the Corner.  Maya thought she'd teach the game to her school friends.

We were both surprised that there were no plates that feature Hop Scotch.  It was such a popular game when I was a child and continues popular today.  However, Maya and I were very happy to see a plate that showed children reading books to one another.


She was shocked last year when I told her there were no iPads when I was a little girl.  Her pity was touching.   However, now that reading is a passion for her, she no longer feels sorry for me. 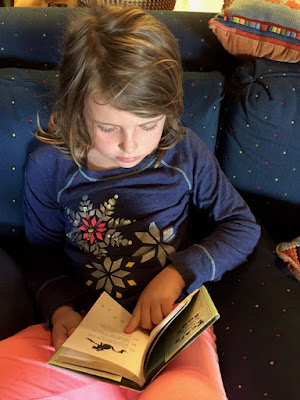 Although, she does love her apps.