David found a lovely cup and saucer at the Alameda Point Antiques Faire (I call it the Alameda Flea).  The pattern commemorates the untimely death in 1817 of Princess Charlotte of Wales, who was the only legitimate grandchild of George III.  She was the daughter of George, Prince of Wales, who later became George IV. George was one of 15 children, so it seems a bit strange that there were no more heirs.

When Charlotte died in childbirth at the age of 21, it was very important that the sons of King George do their royal duty, which was to produce an heir.  Prince Edward, Duke of Kent, and the fourth son of George III, fathered the eventual heir to the throne, Victoria. She was born 18 months after the death of Charlotte.  And so, Victoria!

Below is a close-up of the pattern.  The funeral urn says "Princess Charlotte." Her portrait is below. The figure at the right, who appears prostrate with grief, is Britannia. The man on the left is Prince Leopold, who was Charlotte's husband.  The anchor, a symbol of the naval might of Britain, is broken.  The hour glass is a symbol of time, which is always fleeting.  On the top of the hill on the right is Windsor Castle, one of the great homes of the royal family.

One more photo.  The black print with pink lustre trim looks well with blue and white on my dresser. 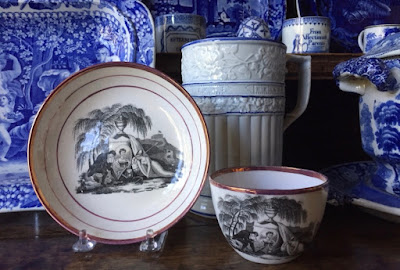