THE PROGRESS OF THE QUARTERN LOAF ON TRANSFERWARE 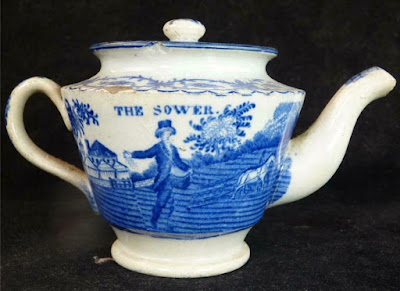 
I recently purchased a very damaged small teapot with "The Sower" on one side and "The Reaper" on the other. I have long been interested in these patterns because I have entered so many in the database of the Transferware Collectors Club. They are part of a series titled "The Progress of the Quartern Loaf." There are six different patterns: the Ploughman, The Sower, The Thrasher, The Reaper, The Miller, and The Baker. All are in the Transferware Collectors Club Database of Patterns and Sources.

The patterns are based on illustrations* that accompany the poem "The Progress of the Quartern Loaf"* by Mary (Belson) Elliott (ca.1794-c.1870). The poem describes the labor involved in the genesis of a loaf of bread from the preparation of the earth by the ploughman to the making of the bread by the baker.

The mark on the back of the plate above is the title of the poem.

I haven't been able to find a print of "The Miller." We will have to make do with the print on the plate.


Below is the mark found on the back of the "Miller" plate.

There are 17 "Progress of the Quartern Loaf" patterns by many different makers in the TCC database.  I think the popularity of the series is due to the importance of bread as a staple of the 19th century diet. The plates were made at a time when the Corn Laws made the import of grain from Europe and elsewhere too expensive. Many people starved. I wonder if the poem was a subtle reference to the unpopular law.  Just a guess.  The law was repealed in 1846.

One more thing. The poem and patterns usually appear on children's plates and mugs, but I own 9.25 inch plates printed with four of the patterns surrounded by a Canova border! They all are marked Canova and have the initials J T.  I'd love to hear some of your thoughts as to maker and owner.


*The illustrations are from the Toronto Public Library, https://static.torontopubliclibrary.ca/da/pdfs/37131039915244d.pdf

*According to the dictionary (Webster's Revised Unabridged Dictionary), a quartern loaf weighs about four pounds. A quartern, a traditional English unit of weight for bread, is made from a quartern of flour, equal to 1/4 stone or 3.5 pounds. The finished loaf usually weighs about 4 pounds; as a result a quartern is sometimes described as a weight of 4 pounds.

*The other side of the teapot which shows the "Reaper."