I have always liked the works of Shakespeare.  My mother told me the stories of the plays when I was little, and took me to see "Twelfth Night" when I was twelve.  However, it was a trip to the American Shakespeare Theatre in Stratford, Connecticut with my tenth grade class to see "A Winter's Tale" that turned my like into love.  My class traveled from a Philadelphia suburb to Connecticut and back in one day.  It took about eight hours round trip (there was no bypass through New York City in 1960).  And, of course, the several hours for the play.  I don't remember eating, but we must have.   It turned out to be a highlight of my life; a beautiful April day and an introduction to one of my favorite plays.  What could be more romantic than that?  I fell in love with Shakespeare.

I was told years ago that there aren't many Shakespeare patterns from the first half of the 19th century, but there are an abundance in the last half.   I haven't done a formal study, but most of the Shakespeare related patterns in the Transferware Collectors Club Pattern and Source Print Database are on tiles from the end of the 19th century.  Most of the tiles were made by Mintons (1872-1950) and Minton & Hollins (1868-1962).

Mintons made 24 patterns in the Shakespeare series, which were designed by John Moyr Smith circa 1873-1874.   They include the title of the play as well as the act and scene.

Minton Hollins & Co. also made tiles that illustrated Shakespeare's plays.  The name of the play is not printed.  The scene above shows Desdemona pleading with Othello. She wants him to believe that she has been faithful.  In case you don't remember the play, it doesn't end well.


The Aesthetic Movement pattern above looks like a souvenir.  The postcard-like cartouches  illustrate the room in the house on Henley Street in Stratford where it is thought William Shakespeare was born and the cottage in the nearby village of Shottery, where tradition has it his wife Anne Hathaway was born.   The pattern below is very similar to "The World" series plate, but this one is named "Shakespeare."  It shows a portrait of Shakespeare and the Collegiate Church of the Holy and Undivided Trinity in Stratford-upon-Avon.  The church is often known as Shakespeare's Church, due to its fame as the place of William Shakespeare's baptism.

Children's plates, often used as teaching tools, are found with Shakespeare subjects.  Below is a 6.4 inch plate made by Evans & Glasson (1850-1862) with the pattern "Shakespeare's Seven Ages of Man Illustrated."   What an excellent way to introduce a child to one of Shakespeare's famous and meaningful works.


An earlier child's plate, made by Lewis Weston Dillwyn (1824-1831), illustrates the sixth age of man. This plate, along with the mug and drainer above, are a few Shakespeare patterns I have found from the first part of the 19th century.


Below is Shakespeare's "All the world's a stage" from "As You like It," Act II Scene VII. 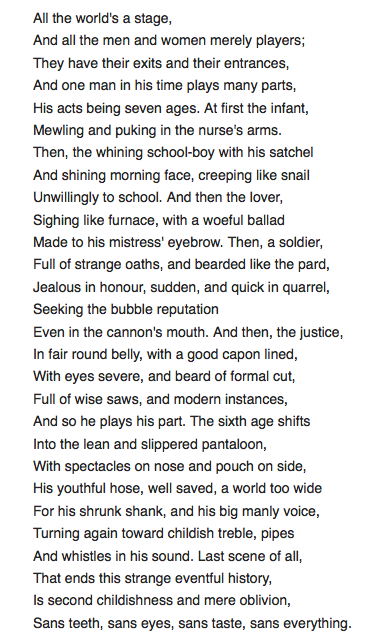 It's strange to think I was halfway between the second and third age when I fell in love with Shakespeare.  Now, I am in the sixth age.

I'll end with this from "A Winter's Tale." 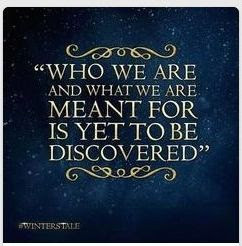 This was true when I was fifteen, and remains true 56 years later.