February 27 is National Polar Bear Day.   It is also National Strawberry Day and National Kahlua Day!  As I said in my last post, there seems to be a national holiday for almost everything.  There also seems to be a transferware pattern for everything too.

Polar bears feature on items found in two major animal series; "Sporting Series" by Enoch Wood & Sons and "Quadrupeds" by John Hall.  They are copied from the polar bear print found in "A Cabinet Of Quadrupeds" by John Church, which was published in 1805.

The "Sporting Series" polar bear was used on four shapes;  a platter (above), a basket, a soup tureen undertray and a vegetable/pie dish.


The "Quadrupeds" polar bear was used on the base of a square covered tureen.

Robinson, Wood & Brownfield (1837-1837) made a series called "Zoological."  It features fanciful patterns of the London Zoological Gardens (London Zoo), which opened in Regent's Park in 1828.   Below is a  scene of the polar bear enclosure.

Here's a real polar bear that I photographed at the San Francisco Zoo. 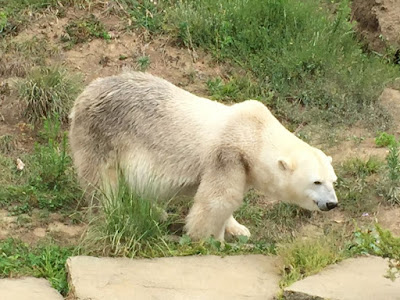