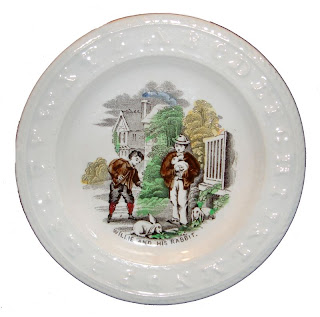 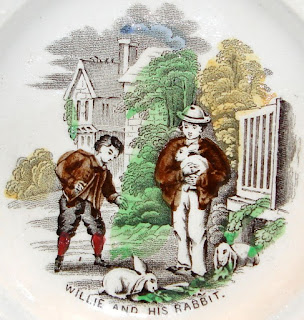 I started this blog to share the knowledge that I have gained from looking at patterns on 19th century British earthenware.  As an editor of the Pattern and Source Print database of the Transferware Collectors Club, I look at many patterns.  The rabbits on this child's plate (notice the molded alphabet border), "Willie and His Rabbit" looked like  French Lops.  However, when I did a bit of research, I discovered they were English Lops.  The English Lop has longer ears than his French cousin.  It was arguably the first rabbit to be bred as a pet rather than for its fur or meat.  The English Lop was a very popular pet in the 19th century and remains popular today.
Posted by Judie Siddall at 11:36 AM