One of the most famous manufacturers of English ceramics is Spode.  The factory was in business on the same site (see the history of the factory ownership here)  for almost 250 years, and made some of the most enduring and beautiful transferware patterns;  Italian, for example, was made from circa 1816 until the factory closed around 2009.

I have a long history with Spode's  Italian.*  I was given 133 pieces (new) as a wedding gift in 1976.  The dishes have appeared at all of my Thanksgiving dinners since November 1976!

I have other Spode patterns too.  For example, I spotted a Spode platter at an antiques shop in 1977 that reminded me of my honeymoon in Rome.  The pattern is actually called Rome!  The platter has resided on my dresser for nearly 40 years.

This is a preamble to explain why I was happy the  TCC  2015 tour included a visit to the old Spode factory site, which is now known as the Spode Works Visitor Center.  The visit included a demonstration of the transfer process by Paul Holdway,* and a look at a collection of transferware items and copper plates.


Why was Spode so important? Why should the site be preserved?  The factory made useful and beautiful things for more than 200 years, but the poster below illustrates that not only beauty, but science, historical material, and community were fostered at the site.   It is part of English history.

I have been to the factory site many times, and hope I can visit again.

*If you want to know more about Spode's Italian pattern, follow this link to the Pam Woolliscroft's blog posts titled Spode & Italian on her blog Spode History.  You can also see a link to Richard's Halliday's 2013 book, The Italian Pattern.

*To see a You tube video of the transfer process by Paul Holdway which was produced by Richard Halliday, click here.

Take a look at the TCC England Tour 2015 Parts One, Two, and Three.

Posted by Judie Siddall at 7:25 AM No comments:

I have already written about another attack on the innocent; the Boston Marathon massacre of 2013.  I am sad that I am writing this kind of post again.  The murder of civilians in Paris on Friday 13, 2015 was a heinous crime.

There really isn't much 19th century transferware with a Paris pattern, but I did find "Peace of Europe Signed at Paris, May 30, 1814" in the Pattern and Source Print Database of the Transferware Collectors Club.  It illustrates both the sadness and the irony of a fragile peace treaty.  The pattern commemorates what appeared to be peace when Napoleon abdicated as Emperor in April 1814, and the Treaty of Paris was signed by the Allies; Britain, Prussia, Russia, Austria, Sweden, and Portugal.  Instead, in February, 1815, Napoleon escaped from exile on Elba, and was welcomed back by the French.  War broke out again, and didn't culminate until Waterloo in July, 1815.  There was a second Treaty of Paris that was signed in November, 1815.   Thus,  two peace treaties in little more than a year with, of course, war in between.   Notice that the second treaty was signed in November, 1815;  two hundred years before the recent killings in Paris.  I am meandering around what I wanted to say in my first sentence; plus ça change, plus c’est la même chose (the more things change, the more they stay the same).


Posted by Judie Siddall at 8:07 AM No comments:


What is this deer doing in the Potteries Museum And Art Gallery?  The museum is filled with all kinds of things; decorative art, fine art, and even natural history.  I always go to the second floor to see the pottery, for which the area became known, but there is so much more.  Like any good museum, there is something for everyone.

I love the cow creamers.  There are 667 of them in the Keiller Collection at the Potteries Museum.   The caveat when the collection was donated was that two thirds always had to be exhibited.  That is a lot of cows!  If you want to read an excellent and detailed article about cow creamers,  see "Transfer Printed Cow Cream Jugs: A Breed All Their Own" by Loren Zeller in the Transferware Collectors Club Bulletin.


There is so much pottery at the museum that I can only give you a taste.  If you want the whole meal, I suggest you go in person.

I have shown you some of upstairs ceramics, but here are some of the downstairs items (i.e. the reserve collection).   Notice that the items are really just in storage.

Continuing with the TCC England Tour 2015, we visited Keele Hall in Staffordshire, the ancestral home of the Sneyd family, that houses the Raven Mason Collection of Porcelain and Ironstone China.  The building looks Jacobean, but it was actually built in the 19th century.


Here is a bit of an aside.  I sometimes get confused as to which Mason is which. For example, who is Miles Mason, William Mason, George Miles Mason, or Charles James Mason?  Also, Francis Morley and George Ashworth?  Confused?  Take a look at the Mason's Chronology link here.

The Raven Mason Collection has cases filled with beautiful ironstone and porcelain patterns.  I mainly focused on the ironstone.

It is hard to see different patterns in the cases shown above, so I'll show some bigger photos.  Here is arguably the most well-known Mason's ironstone pattern; Water Lily.

Shown below is a less well-known pattern printed in blue.  It is know as Chinese Dragon, and also has an impressed line mark on the back.   This mark refers to the type of Welsh clay; "Mason's Cambrian Argil."   The Mason's factory appears to be the only one to incorporate the name "Cambrian" into the factory mark.

I thought I'd show you the vivid blue and gold decoration on this jug.  It is hard to see in the case above.


Just a few more patterns.  These were made by Charles James Mason after his brother, George Miles, retired from the partnership; if you look at the marks,  you'll see they appear to be from two different business operations.


The visit to Keele Hall whetted my interest in Mason's Ironstone China in particular and Mason's china in general.   The Transferware Collectors Club Pattern And Source Print Database has lots of information about Mason's patterns.   I also looked at one of the books in my own library; Mason's -  The First Two Hundred Years by Gaye Blake Roberts.  There are many more.

I see that I have digressed as usual.  The TCC Tour was much more organized than my brain!  I shall continue showing you some more of the highlights of the tour in my next blog post.

Posted by Judie Siddall at 7:36 AM No comments:

THE TCC ENGLAND TOUR 2015: PART ONE - THE VICTORIA AND ALBERT MUSEUM

I just returned from the Transferware Collectors Club Tour and Meeting in England.  We started in London and ended in the Staffordshire Potteries.   I thought I'd show you some of the highlights (to me).  I took 1324 photos, so I had to choose just a few.  This was hard, so I tried to focus on the pottery.  I also decided to cover the tour in more than one blog post.

The Victoria And Albert Museum has a huge ceramics gallery (they also have a huge amount of everything else).   The ceramics are displayed as visible storage.


The museum showcased a special exhibit titled Blue and White: British Printed Ceramics.   It highlighted the connection between antique and modern printed ware.  The V&A sign gives you a bit of blue and white history. 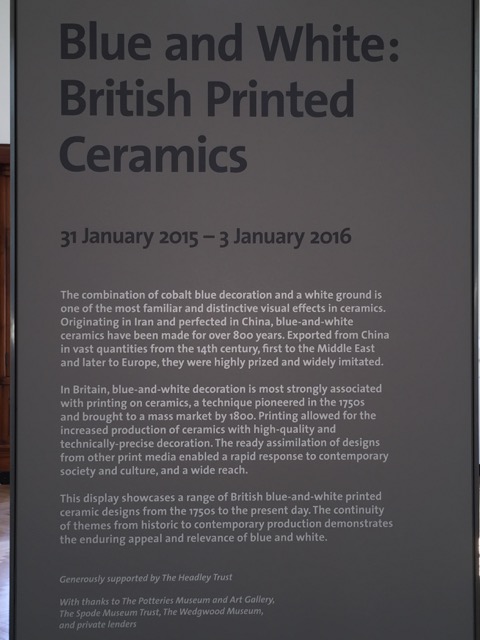 Here is a case from the exhibit showing old and new transfer printed pottery.


Below is a close-up of a pair of juxtaposed old and new transfer print.


Take a look at the iconic and probably most recognizable blue transfer printed pattern; Willow.

Below see a case of both traditional Willow pattern ceramics, as well as modern interpretations.

Not all of the ceramics at the V&A are transfer printed (just kidding).


One last thing.  The entrance to the V&A has a gorgeous Dale Chilhuly glass sculpture hanging from the ceiling. 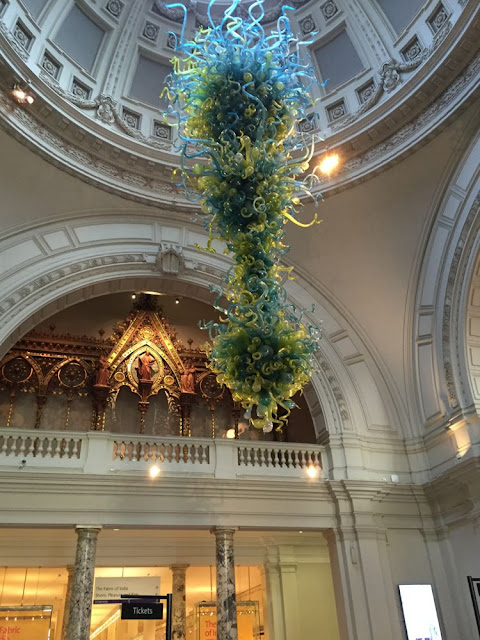