While adding patterns to the Transferware Collectors Club Database of Patterns and Sources,  I noticed a pattern of a young girl playing a guitar-like instrument.  I knew the instrument wasn't a guitar.  It was a hurdy-gurdy.  How I knew this was a surprise to me.  Somewhere deep in my brain was the word and the image.  The hurdy-gurdy must have made an impression on me at some point, so I decided to do a bit of research.  I assumed the hurdy-gurdy was a carnival instrument of fairly recent (last one hundred and fifty years) invention, but I was wrong.


The hurdy-gurdy, according to Wikipedia, goes back to the early Middle Ages.  The website shows a photo of the hurdy-gurdy or its close relative, the organistrum, on a frieze on the 12th century Portico da Gloria on the cathedral at Santiago de Compostela in Spain.

The hurdy-gurdy is also found in the triptych by Hieronymus Bosch, "The Garden of Early Delights." The triptych has been a favorite of mine since I was a teenager.  Bosch too.  If the people look unhappy, it is because they find themselves in the part of the triptych that depicts Hell!


I was not totally wrong about thinking the hurdy-gurdy was used by 19th century itinerant or carnival players.  See the photo below.


As I have said many times, transferware patterns lead me to new discoveries such as this history of the hurdy-gurdy.  Is the instrument still played today?  Yes!  Google Hurdy-Gurdy and lots of YouTube videos will appear.

I digress.  Such fun!


I can't believe it has been five years and 285 posts! I have learned so much from the study of transferware patterns and I have enjoyed writing about new discoveries (at least to me).  However, I mainly want to thank everyone who reads my blog. As I said last year, there would be no blog without readers and encouragement.

Below are some of my posts that are the most popular. 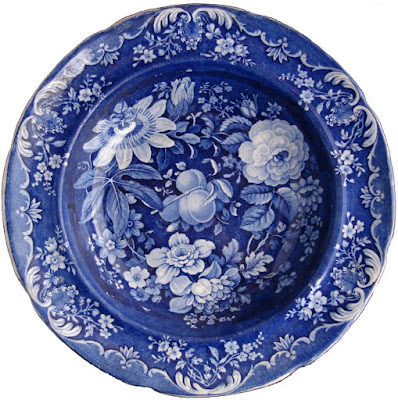 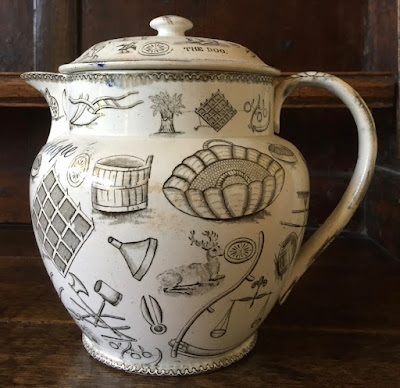 Toast Water Jug and Recipes.  Probably popular because of the delicious recipes.  I jest. 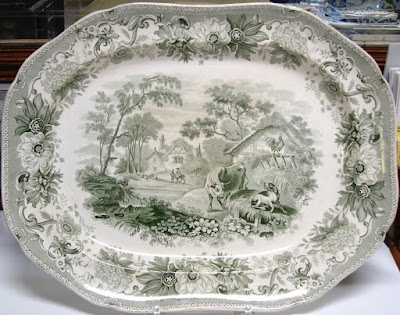 Aesop's Fables and The Dog in the Manger


Here are some of my posts that have been popular during the last year. 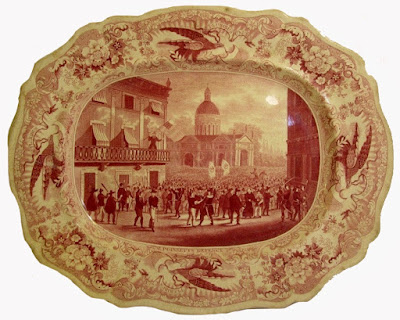 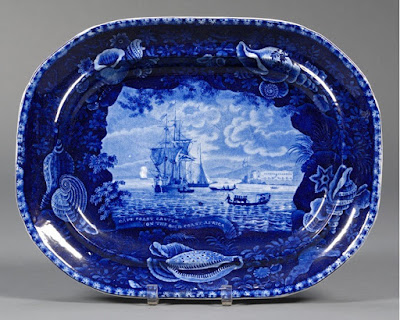 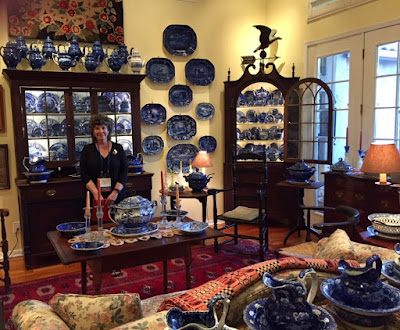 Transferware Collectors Club 2017 Annual Meeting
This is not my collection, but I wish it were!

Thanks again for a wonderful five years of "Dishy News!"


January 14 is National Dress Up Your Pet Day.  Really.  There is a national day for everything.  I would have ignored this special day if I hadn't owned a charming plate that shows a cat wearing clothes! It is also walking on its hind legs.  My cats would never wear clothes or walk on hind legs without a fight!  The pussy cat pictured in this pattern seems much more docile that Charlotte or Percy.  It seems quite happy to entertain the little girl.  I, in turn, am entertained by this delightful pattern.


Posted by Judie Siddall at 9:07 AM No comments:

THE CROWN OF HOPS AND PRATTWARE TREASURES

My husband bought a lovely Prattware comport printed with a pattern called "The Hop Queen."  I am glad he did because I love the bright colors and charming scene of a little girl being decorated with a crown of hop flowers.  I learned it was copied from the 1835 painting by W.F. Witherington titled "The Crown of Hops" or "The Hop Garland."

I encouraged David to buy more of these lovely multicolored transferware plates and comports.  Be careful what you encourage!

Below is a photo of the the other pattern, "The Blind Fiddler," shown in the grouping above.


According to K.V. Mortimer's book "Pot -Lids," much, if not most, of the patterns on what he calls ware (not pot lids, but dishes and comports) were copied from famous and well-loved paintings. The book is illustrated with photos of lovely patterns with many different borders.  I recommend Mortimer's book to anyone to wants more knowledge about this type of transferware.  I, on the other hand, just want more of the ware!


Posted by Judie Siddall at 2:07 PM No comments:

A child's plate with the text "Hold Your Hand Out Your Rascal" didn't surprise me.  A teacher hitting a child's hand with a switch was something most children could relate to in the 19th century in England and America. The plate with the molded alphabet border was intended as a gift for a child. Perhaps as a warning.  And, although some of us look at this pattern as inappropriate for today's child, it was seen as appropriate and humorous in the 19th century.

I thought I'd learn about corporal (physical) punishment in schools today.  I knew corporal punishment in schools was common in England and the United States in the 19th century.  And before.  I didn't realize that it remained legal in England and America throughout the 20th century.  England didn't abolish corporal punishment in state schools until 1986 and in public and private schools that received no state funding (what we'd call private schools in the U.S.) until 1998.  However, in the United States, there is no Federal law outlawing corporal punishment! As of 2014, there are still nineteen states that allow it: Alabama, Arizona, Arkansas, Colorado, Florida, Georgia, Idaho, Indiana, Kansas, Kentucky, Louisiana, Mississippi, Missouri, North Carolina, Oklahoma, South Carolina, Tennessee, Texas, and Wyoming. That said, the first state to outlaw corporal punishment was New Jersey in 1867.  The second was Massachusetts in 1971!  One hundred and four years later.  To say I was surprised is an understatement.  I will add that some states require parental permission for corporal punishment.

What about corporal punishment such as spanking by a parent?  That is a topic for you to explore, but it is legal in every U.S. state.

I digress as usual because I was flabbergasted that corporal punishment was still legal in schools in 19 states and in every private home in every state.  Transferware patterns continue to open windows onto new knowledge.

One more pattern.  Below is a pot lid found in the Transferware Collectors Club Database of Patterns and Sources.  The boy is about to be birched or beaten by his teacher (or parent) with a birch stick.