If you have been following my blog, you know I enjoy finding the source prints that inspired transferware patterns.  I have found many source prints, but until recently I never heard of the artist Francis Barlow (ca. 1626-1704).  He was an English painter, etcher, and illustrator.  I discovered him when I looked for the source print that depicts the Aesop's Fable "The Bear and the Bee Hives."  (See my blog post titled "Bears Grease, Aesop's Fables, and Source Prints" here.) I learned that Barlow illustrated a book of Aesop's Fables that was published around 1665, so I thought I'd see if other Barlow prints appear on pottery.  I found a few pottery examples in the Transferware Collectors Club Database of Patterns and Sources.

Below are ceramics, mainly from Spode and Copeland & Garrett's "Aesop's Fables" series that are copied from Francis Barlow's illustrations.

I also found a beaker, perhaps intended for a child, that features Barlow's illustration for the fable "The Cat and the Roasted Chestnuts."

Barlow did the illustrations for another book titled "Animals of Various Species Accurately Drawn." I realized that the frontispiece was found on a child's mug that features the word's "A Present for my Dear Boy."  I always thought the pattern was inappropriate for a child, although my grandsons didn't worry about the goose being carried off by the fox!

I saw another pattern that looked familiar in "The Animals of Various Species."  It showed a bird of prey menacing some chickens.  I vaguely remembered owning a jug with the same pattern. It took me a long time to find it, as it was hidden away in a cupboard.   I bought it in 1990.


Here's another pattern that features the same barnyard scene.  I think the hawk is trying to capture some of the chicks. 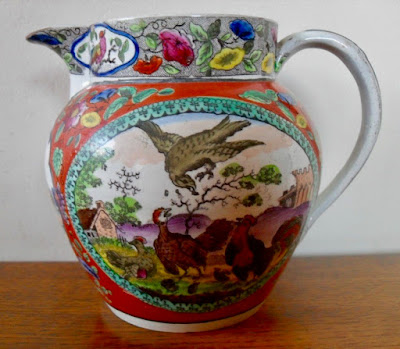 And another that resides in the TCC database. 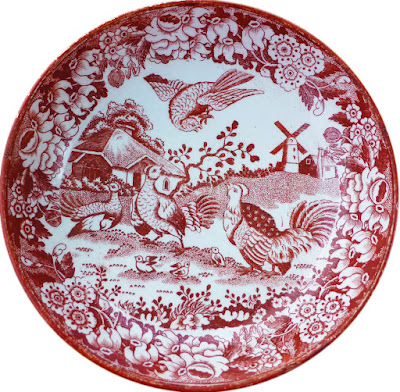 As for the drabware jug with the silver resist border, I put it on my dresser.

Posted by Judie Siddall at 12:40 PM No comments:


I have always loved early 19th century ceramic tokens of affection.  In particular, I love the transferware plates and mugs intended for children because at a time when life, particularly a child's life, was so fragile there is a poignancy attached to every ceramic plate or mug.  There are many patterns in the Children's Subjects/Gifts For Good Children category in the Transferware Collectors Club database, but I thought I'd focus on patterns that were from and for family members.


The last photo shows a tricky inscription: "For My Favourite."  I suggest that there is only a favorite child when there is only one child!  Perhaps this plate was intended as a love token.  Are there ceramic love tokens?  Take a look at my blog post "Ceramic Valentines."


Posted by Judie Siddall at 1:17 PM No comments:


I recently was in Santa Fe, New Mexico for the opera.  I went to five operas in five days: Lucia Di Lammermoor, Die Fledermaus, Alcina,The Golden Cockerel, and the world premier of The (R)evolution of Steve Jobs.  I enjoyed them all, even the three and a half hour Alcina, but I liked the Steve Jobs opera the best.  However, I digress, as this is a transferware blog, not an opera blog.

I already knew that Lucia di Lammermoor appeared on transferware.  The patterns are not based on the opera, but on the 1819 Sir Walter Scott novel "The Bride of Lammermoor" on which the opera is based.  Scott's novel was a best seller, so it made sense for Donizetti to capitalize on it.  The story includes young lovers from feuding families (think Romeo and Juliet), lots of sturm und drang, and many deaths.  (Great action for a 19th century Romantic opera!)  The title of the transferware series is "Scotts Illustrations," of which the "Bride of Lammermoor" is one.  The series was made by Davenport (1794-1887) around 1835.  Davenport also capitalized on a sure thing.

There are other patterns in the "Scotts Illustrations" series that illustrate the group of Scott's novels released from 1814-1832.  "Waverley" was the first, so the novels are known as the the "Waverley Novels." Here are some of the pottery examples.  All  of the pottery photos are from the Transferware Collectors Club Database of Patterns and Sources.

I never know when something is going to remind me of transferware.  I just never expected it to be an opera!


One more thing. If you want to know more about the magnificent Santa Fe Opera, follow this link.