POTTERY IN CONTEXT: AN UNEXPECTED DISCOVERY

I inspect properties for environmental hazards.  Recently a project brought me to rural Sonoma County, California, about 65 miles northwest of San Francisco.  That is, 65 miles as the crow flies, much further (and slower) as the truck drives.  The site was located at about 1,400 feet in elevation along a ridge paralleling the coast, was populated by an old apple orchard and an alpaca, and was surrounded by vineyards, redwood groves, and fields with dramatic views of the Pacific Ocean, way below.  Slopes on either side of the ridge were precipitous.  Rarely have I been paid to visit such a lovely place.

The property was occupied by an old house, which turns out to have been a hotel and stagecoach stop in the second half of the 19th century on the route from the inland town of Santa Rosa to the coastal town of Gualala, via the out of the way town of Bodega.  The prominent industry was logging of redwood trees, and the roads, such as they were, would have been deeply rutted by logging equipment and transport.  The trip today, along the Russian River and bypassing Bodega, is about 67 miles and according to Google Maps, takes about two hours (often steep and curvy), but in the 1870s the route was much longer and required three days with two overnight stops.  To the traveler, it probably felt like six.

So at any rate, here I was in the home of the current resident, a delightful 90 years or so lady who had lived on the property since the early 1950s.  I’ll call her Clara (not her real name).  But so what?  The point of this is, that on a wall facing the front door, was a delightful array of items, and prominent (to me at least) was a lovely American advertising calendar plate.  I spotted it from across the room.

Further perusal quickly established that the merchant, who had given away the plate to his customers, was W. A. Wernecke, “The” Butcher, whose phone was Main 84.  Location not evident.  I recognized the pattern from 1910, and thought I recognized the name “Wernecke”.  On returning home, I found that my eBay research of calendar plates (conducted religiously since November 2010) had already netted two examples of the same plate, and that one of the eBay sellers identified Wernecke’s location as Santa Rosa, California.  A quick Internet search resulted in confirmation from two Google Book sources:  I found a 1902 advertisement for W.A. Wernecke, “Dealer in all kinds of Fresh and Salted Meats, Sausage, Lard, etc”; and a 1910 listing in a May 1910 publication of the Independent Order of Odd Fellows of the State of California (IOOF), announcing W.A. Wernecke’s death.  So sadly, Wernecke was not able to benefit from his advertising give-away.

For those who may have missed it, I discussed advertising calendar plates in a previous Dishy News posting.  Briefly, advertising calendar plates were American-produced and widely distributed between 1906 and 1921, with production peaking in 1910.  They were complimentary gifts from merchants to their customers, and although some of the merchants were located in cities and larger towns (such as Santa Rosa), many were located in extremely remote and very small towns, often with only a few hundred population and a few hundred more in the surrounding area. For more information, read my earlier blog.

For nearly five years I’ve documented the American advertising calendar plate, and now have about 1,500 in my database.  The endeavor is time consuming but academically and aesthetically pleasing, and I’ve purchased not a few as examples.  But for all the research and buying, nothing has given me more pleasure than to see a treasured example in the living room of a 90 year old lady living miles from the nearest real town on a ridge overlooking the Pacific Ocean.

I have been writing "Dishy News -  A Transferware Blog" since January 2013 (see my first post here), and this is my 200th post!   Below are a few of my most popular posts (those most read by my readers).

Inappropriate Or Frightening Patterns For Children
What Is A Custard Cup?
The Temperance Movement On Transferware
Mozart, The Magic Flute, The Masons And America
Crimean War Again (Plus ca change, plus c'est la meme chose)
Cumulative Rhymes On Children's Pottery
Yellow Printed Brownware
The Dog In The Manger And Aesop's Fables
"Quadrupeds" And Aesop's Fables
Shells
Clematis
Yellow Transferware
What Is A Bourdaloue?
The Tread Mill - The Way Of Transgressors Is Hard
Wedgwood Water Lily

Here are some of my favorite posts, although I like most of the posts above too.

Below is a photo of my work space.  Always an inspiration!

FOR A DEAR CHILD WHO IS STARTING SCHOOL

My beloved granddaughter starts kindergarten today.  She is embarking on a new part of her life.  I remember my first day of kindergarten in September 1949.  It was both exciting and frightening; who would I meet and who would be my friend?  Already, I was more interested in the social aspects of school rather than the academics!

Below are two five year old girls separated by 66 years, but united by love. 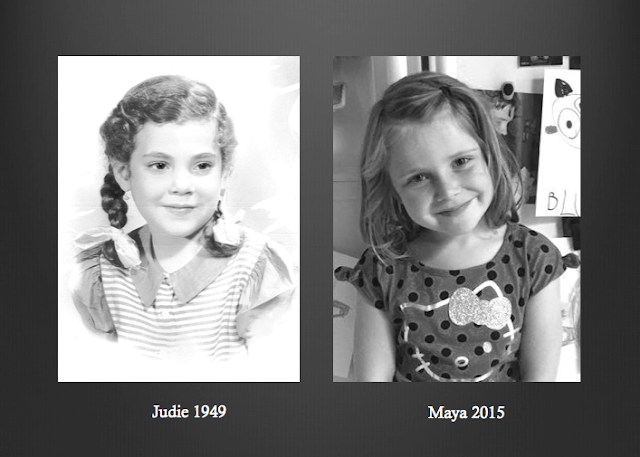 I hope Maya loves school as much as I did.

If you want to see more transferware school patterns, look at my blog posts "Love Your School And Books" and "School And Transferware."


Posted by Judie Siddall at 7:15 AM No comments:

THE LEARNED DOG REDUX AND BITS AND PIECES

I purchased a damaged yellow ware (or yellowware) pot and cover because I recognized the dog on the lid.  It was the same dog that patterns my yellow glazed earthenware child's mug (see below).  The pattern also graces (I love this pattern) the cover of my children's alphabet book "Dishy Animals ABC."  I even wrote about it in a blog post titled "Transferware Dogs or "The Learned Dog."


I have long been fascinated by items that are printed with patterns that appear to be random bits and pieces.  The pot above is one of them.  Obviously, it is also poorly printed: a bit slap dash!  The printing is blurred and parts are missing.   My theory is the patterns were available for young potters learning how to transfer.  Certainly, the person who printed the Potters' Art poem needed more practice!  And, "The Young Sportsman" title under the dog leaves a lot of room for improvement.  The singing birds with the title "For Innocence & Truth" is the most successful print, although a bit uneven.


I would love some feedback about my transfer practice theory.  I would even like to know the use of this pot.   Did it have anything to do with children?  The Potters' Art poem, the jumbled alphabet, and the dog are all found on items made for children.
Posted by Judie Siddall at 2:59 PM No comments:

RECOGNITION OF THE FAMILIAR AND TRANSFERWARE COWS


The cow pattern on a rather battered coffee pot seemed familiar.  Once the pattern was imprinted on my brain,  I saw it everywhere!  Well, not exactly everywhere, but I did find the three cows (sometimes two cows) on four other pieces; a child's plate, a platter, a creamer, and a cup plate.


I imagine the third cow is missing from the cup plate because it is only 4 inches in diameter.  The creamer is also quite small.

As much as I enjoyed finding the same cows (albeit in different patterns and by different makers), I really like most cows patterns, so here are a few more.


Cows were very popular on children's mugs and plates.  They still are today.


One pattern does lead to another.  My final cow patterns are on my dresser.

If you have a favorite cow pattern, let me know.