I met Dora in 1993 because a friend gave me a copy of a magazine that had an article about transferware. She said the pictures reminded her of the pottery I had in my house. I called the phone number at the end of the article, which was for Dora Landey Antiques. I thought I would buy a few pieces of tranferware, but from the moment I spoke to Dora we bonded over our lives more than pottery: children, husbands, animals, the East Coast and much more. Our friendship was immediate and deep. (I've always believed that a close friendship can begin like a love affair.)  We spoke often on the phone before we met in person in the summer of 1994 at the Metropolitan Museum of Art.  Since 1994, we saw each other nearly every year, even though we were separated by the continent between New York and California.

Dora's loves were many, but she loved her family most of all: daughters Yummy, Nina, and Anna, and her six grandchildren. She also loved her friends, her dogs (she had five when I first visited her her), her house (a wonderful old farmhouse), and her blue pottery. Dora started her business, Dora Landey Antiques, in the late '80s or early '90s.  She sold in shops and at shows, and continued to sell blue pottery from Ruby Lane Antiques and on eBay until her untimely death on January 25, 2020.

Dora is survived by her children, Yummy Helmes (David) and Nina Landey (Jodie), and her six grandchildren. She was preceded in death by her daughter Anna.

Dora lived her life fully. She stayed in her own house, enjoyed her family and friends, and sold transferware until a few days before her death. We should all be so lucky.

One more thing. Below is a photo of one of the many beautiful rooms in Dora's house. Beautiful and comfortable like Dora. 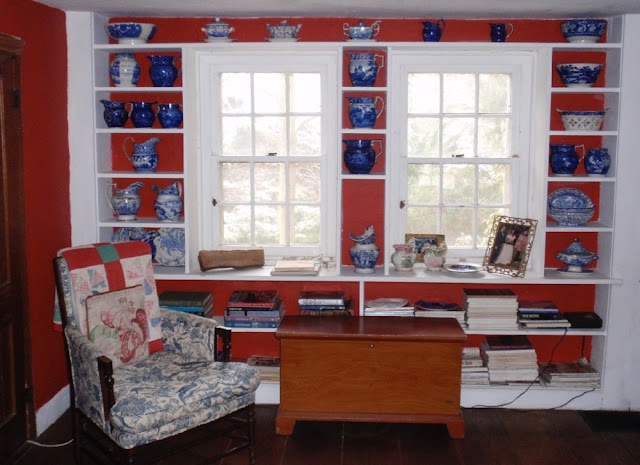