I started this blog to share what I have learned from studying transferware.   A pattern titled Ocean Postage was sent to me by my friend, Michael, for the Children's Category of the Transferware Collectors Club Pattern and Source Print Database.  I hadn't a clue what the pattern was about, so I went to Wikipedia.   Wikipedia says British postal reforms brought cheap rates to the national mail system in 1840.  However, it was still expensive to send mail to other countries as there were no standardized methods to calculate costs.  In 1846 a campaign was launched by Elihu Burritt, an American philanthropist, to standardize overseas postage.  The philanthropic idea was that cheap international correspondence would encourage universal understanding and peace (a lovely idea).  In 1875, a Postal agreement was signed between 22 countries establishing unrestricted standard rates. The above pattern commemorates this event.  It depicts the steam powered sailing ships with paddle wheels (the first ships to regularly carry mail between England and the United States).  Symbolic dolphins and mermaids herald the event. The entire text reads: The Ocean Postage - Britain, from thee the World expects an ocean penny postage, to make her children one fraternity.  Two vignettes and a cartouche appear above the upper banner.  The cartouche shows a pair of clasped hands (dark and light), a dove, and a heart-shaped wreath of laurel leaves.  All of these symbolize friendship and peace.  A train runs across a railway bridge in a vignette to the left of the cartouche.  Perhaps it is the Great Western Railway which is bringing the mail to the ships.  The vignette to the right of the cartouche shows a boat pulled by horses, perhaps on a canal. The canal boat may also be a mail boat.

I'd never really thought about the history of postage.  The pattern on this mug opened a window onto new knowledge.
Posted by Judie Siddall at 7:38 AM 2 comments:

Like all transferware colors, brown comes in many different shades.  (See my post on Purple Transferware for another example of color variations.)  It includes yellow brown, chocolate brown, beige, dark brown and lots of shades in between.


Brown wasn't a good seller in the early 1990s, so I was surprised to see so much of it in the stock of Dennis and Ann Berard.  Dennis said that when brown became popular, he would be ready!  Brown became wildly popular by the end of the 90s, so Dennis was ready. 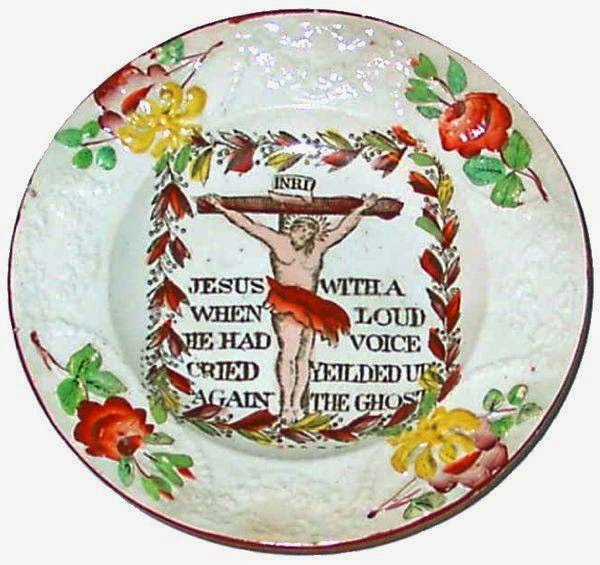 Last year I wrote a post titled Rabbitware For Easter.  This year I shall show you a child's plate with a scene from the Crucifixion of Christ.  Patterns made for children were often intended as gifts which could also be used as teaching tools.  This plate may have been an Easter gift.  It was made by Baker, Bevans & Irwin (1814-1838) in Swansea, Wales around 1830. The text, which is from Matthew 27:50, reads: Jesus When He Had Cried Again With A Loud Voice Yeilded (sic) Up The Ghost (spirit).  INRI at the top of the cross stands for Iesus Nazarenus Rex Iudaeorum or Jesus Of Nazareth, King Of The Jews.
Posted by Judie Siddall at 7:08 AM No comments:

HAD GADYA AND GOATS ON TRANSFERWARE

As a child sitting at the Passover seder, I always looked forward to the song Had Gadya.  I knew Had Gadya was at the end of the seder,  and I was tired, full and ready to go to bed.  But the words of the song's cumulative rhyme (see my post on cumulative rhymes here) and the rousing music (hear Had Gadya sung by Cindy Michelassi), always energized me.  Still does.
Here are two wonderful explanations of Chad Gadya: Kid Stuff
and From goat to God: Chad Gadya tells the story of the Jews.

Since this is a transferware blog, I shall show you some of my favorite goat patterns.


CHAG SEMEACH!
Posted by Judie Siddall at 8:58 AM 2 comments:

THE STORY OF JOSEPH

Joseph is an important person in the Old Testament as he connects the story of Abraham, Isaac and Jacob in Canaan to the subsequent story of Moses and the liberation of the Israelites from slavery in Egypt. (See what I have written about Moses here).


The story of Joseph is the Biblical story that appears most often on 19th century children's pottery.  There are two major Joseph series: Sacred History of Joseph and his Brethren and History of Joseph as well as individual patterns on cups and plates.  I have always loved the story of Joseph: his coat of many colors, his interpretation of dreams,  his brothers' jealousy (they wanted to kill him! they sell him!),  his success in Egypt, his forgiveness of his brothers.  The story was meaningful to me when I was a child.  It still is.

I was lucky to buy 11 plates in the Sacred History of Joseph and his Brethren series a few years ago.  I thought I would share them with you. ( I have added a twelfth pattern that I found later).  There is no pattern that shows Joseph and his coat of many colors, which to me is the impetus for the whole Joseph story.  If Jacob hadn't shown such favoritism to Joseph (the son of his beloved Rachel), Joseph's brothers would not have hated him.  Of course, they also hated him for his dreams, which do appear on the plates.

Read the Story of Joseph here.