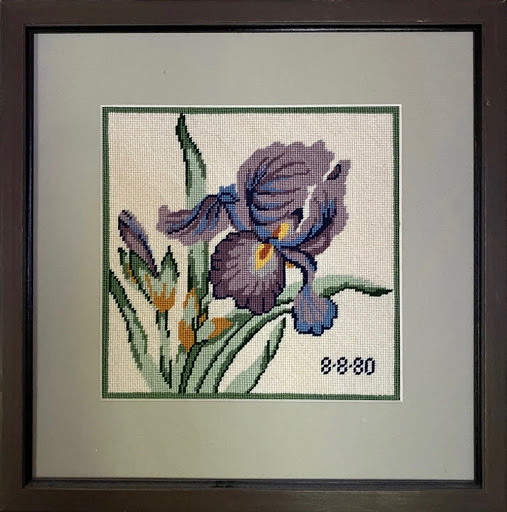 Today, 8/8/20, would have been Darla's 80th birthday. I made a needlepoint picture of an iris (Darla's favorite flower) for her 40th birthday.  She thought that turning forty on 8/8/80 was terrific! Not one to moan about aging, she threw herself a fabulous party that included all of her family and friends. 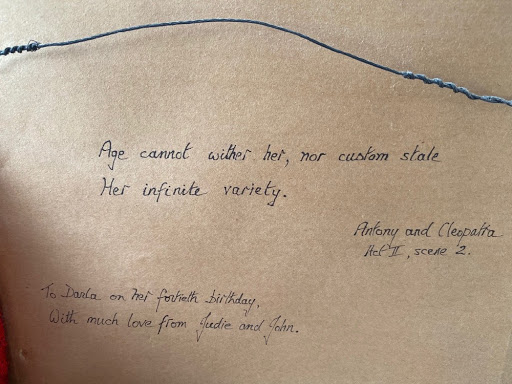 One of the many things Darla and I shared was a love of Shakespeare, so I thought I would include something from Shakespeare on the back of the needlepoint (which I had framed). "Antony and Cleopatra" seemed apt, as Darla was as beautiful and as flamboyant as the Queen of the Nile.  The handwriting is John Siddall's. His handwriting was much better than mine.
I have the needlepoint picture now, as Darla's daughter gave it to me when Darla died in 2010. (John died in 1981.) This one little piece of needlework is a memory of two of the people I loved so much.  I'll add that they loved me too.
Who was Darla?  Look at my post titled Friendship. You'll see some transferware too.
Who was John? See my post In Memoriam.  Also shows transferware.
Posted by Judie Siddall at 12:01 AM No comments: