YELLOW GLAZED EARTHENWARE AND SOME YELLOWWARE 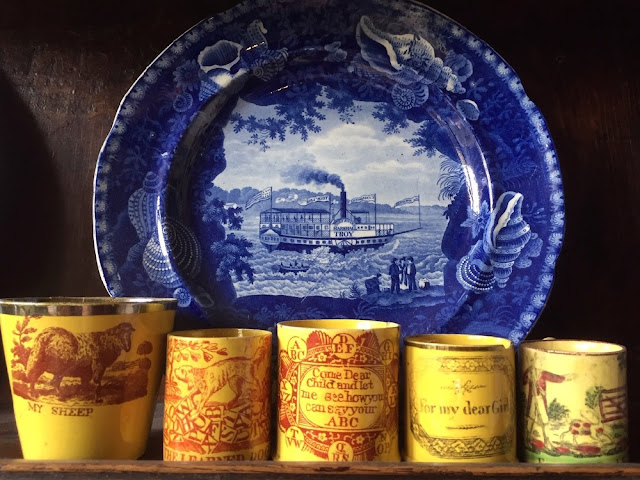 I first became aware of yellow glazed earthenware when I saw an exhibit at the National Museum of American History - Smithsonian Institution in the 1980s.  The exhibit featured the collection of J. Jefferson Miller II, who wrote the book "English Yellow-Glazed Earthenware." According to Miller, "English yellow-glazed earthenware may be defined as a type of creamware or pearlware distinguished by an overall yellow glaze.  It was made in Britain during the final years of the eighteenth century and the first quarter of the nineteenth century."  Yellow-glazed earthenware is sometimes referred to as canary because of its bright color.  It is also called yellowware, but should not be confused with the pottery that has a clear glaze. Yellowware was made in both America and Britain throughout the 19th century (or earlier) and into the 20th century.  See the photos below.

Hopefully, there will be no more confusion between English yellow glazed earthenware and English or American yellowware.

I fell in love with the bright yellow color of yellow glazed earthenware.  I particularly like the the small items intended for children. Here are a few. Some are from the collection of Dennis and Ann Berard and from the database of the Transferware Collectors Club.


There are many mugs, but plates were also decorated with a yellow glaze.


Not all of the yellow glazed items were made for children.

I am mainly interested in yellow glaze with transfer prints, but below are some items that are painted. 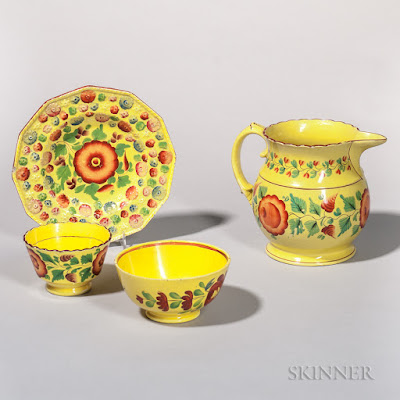 There is an excellent blog post titled "Big and Bright: New Ceramics at Historic Deerfield" that offers more detail on the reasons why and how yellow glaze was developed and used.  The post suggests the color was supposed to raise pottery sales at the end of the 18th century.  It also suggests that the reason you don't see an abundance of yellow glazed items is the color either wasn't very popular or it was difficult to make a consistent yellow glaze.

One more item shows two prints on a beaker.

One more thing.  Are there any transfer printed yellowware items?  Of course.  In my experience, however, most yellowware is not printed.

I would appreciate hearing about your yellow glaze items!

Posted by Judie Siddall at 2:14 PM No comments: