The "Quadrupeds" series by the Staffordshire potter John Hall (1814-1832) is filled with animals.  There is a center pattern as well as different animal scenes in the border cartouches.   Rarely are there any duplications of animals in either the center or the border on any of the sizes and shapes in the dinner service.  The Pattern and Source Print Database of the Transferware Collectors Club documents 18 center patterns.  Multiply the number 18 by  4 (animals in the border cartouches) and you get 72.  When you add the 18 center animals, you get 90.*

As the editor of the Animals category for the Transferware Collectors Club, I have a great interest in knowing the names of the animals.  This is not always easy.  Luckily, most of the animal patterns were copied by the Staffordshire and other British potters from popular 19th century books on natural history.

In this post, I am focusing on the "Quadrupeds" 18 inch by 15 inch platter. 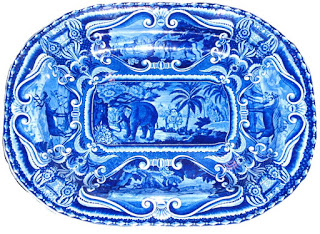 The center animal is obviously an elephant, but it took me awhile to find the source print.  It is from "The Cabinet of Quadrupeds" by John Church (published in 1805).   The elephant is missing his handler and the vaguely Indian scene acts as camouflage, but this is the same elephant. 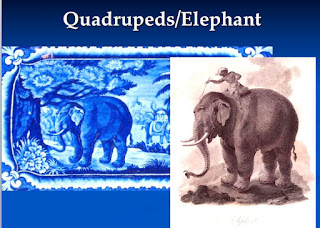 The cartouche at the top of the platter shows a tiger and a nylghau deer. They are separate engravings in "The Cabinet of Quadrupeds," but were stuck together on the platter. 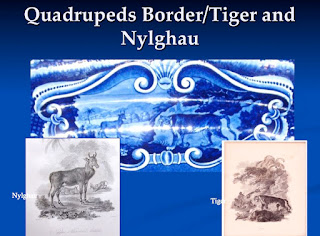 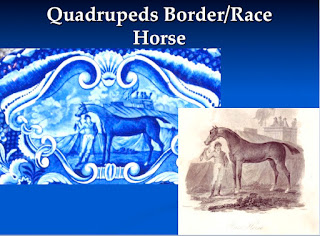 The next shows a leopard who appears ready to spring on its prey! 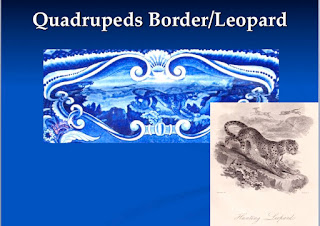 The last illustrates two reindeer, one of which is pulling a sleigh. 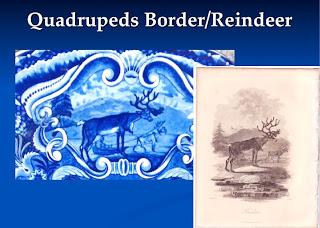 I will eventually figure out the names and source prints for all the animals in the other "Quadrupeds" patterns, but that is a job for another day.

* The number of border cartouches varies depending on the size of the item.  Some of the smaller plates have only three border cartouches and the cup plate (Hyena) has none.  You may already have noticed that one of the cartouches above contains two animals in one border!