I wondered why some of the jugs in my collection had lids as well as strainers in front of the spouts.   I learned they were known as toast water jugs, and were used for medicinal purposes.  What is toast water?  According to Coysh & Henrywood's  The Dictionary Of Blue And White Printed Pottery 1780-1880 Volume II, p. 197,  "Toast Water was a drink intended for invalids made by pouring boiling water on to toast, allowing it to stand, and then straining off the liquid. The recipe is mentioned by Mrs. Beeton in early editions of her Book of Household Management."   Here is Mrs. Beeton's recipe from the section on Invalid Cookery;

I have been told the toast and water brew was used to settle one's stomach.  I wasn't sure, so I did a small amount of research.  Toast water does settle one's stomach.  It was also considered a way to get needed nutriment into a sick person (no glucose IVs in the olden days).  It reminds me of the plain toast (usually with sweet jelly) my mother used to give me when I was ill.  The toast, never burnt, was broken into pieces and placed in the jug.  Hot water was added.  When the brew cooled, the liquid was poured into a cup while the bigger bits were prevented from being poured by the strainer.

My newest toast water jug is patterned with farm implements and farm animals.  It is quite a bit bigger than my Davenport jug, which is 5 inches high.  The new jug is nearly 8 inches!  It also includes the name of the owner, Henry Easthope.  Perhaps he suffered from severe indigestion.


Here is a better recipe for toast water; 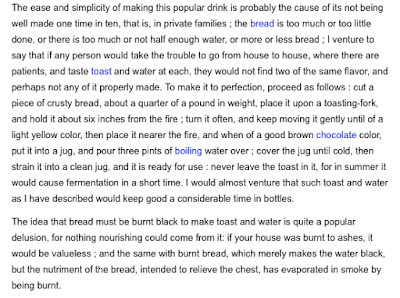 It is very clear that the toast should not be burnt!  The excerpt above is from The Modern Housewife Or Menagere(1850) by Alexis Soyer.   One more recipe, this time a modern one.  It is from the blog "Adventures in thyme and plaice."  The author quite likes the taste of toast water!  I may try it, although I think I shall use a pyrex measuring cup like the one below, not my 19th century toast water jugs. 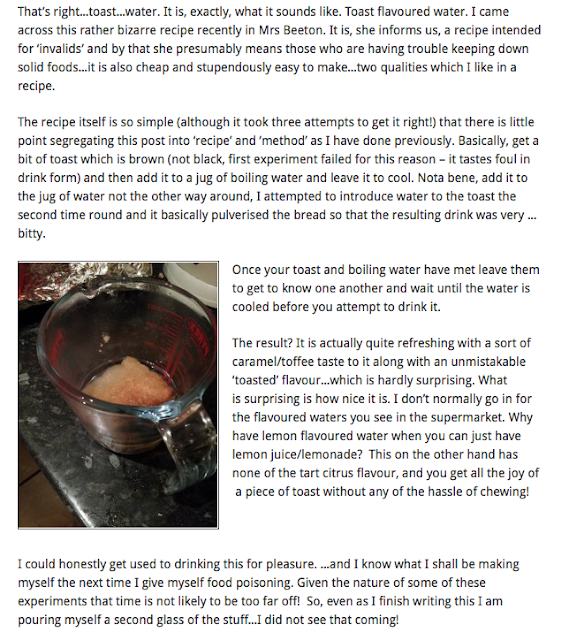 Posted by Judie Siddall at 4:18 PM